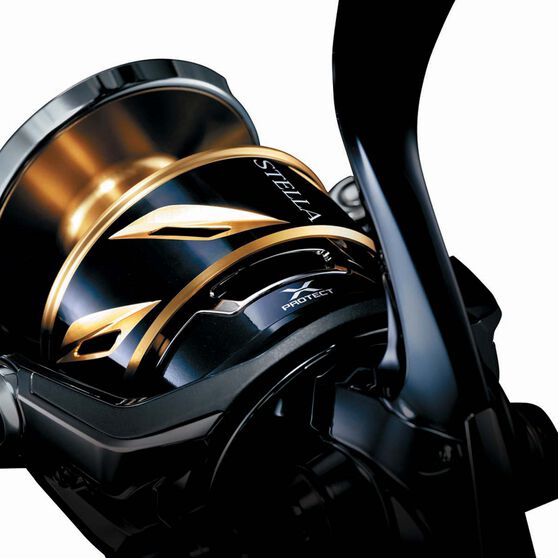 
FREE SHIPPING ON ORDERS OVER $99*
*Metro only. Excludes bulky.

The Stella SW represents the pinnacle of Shimano technology and innovation in the pursuit of creating the ultimate spinning reel. For 2019, the Stella SWC has been released with a number of significant upgrades that deliver Infinite Power across four models – 8000HG, 8000PG, 10000PG and 14000XG.
Infinity drive has been introduced to complement the existing X-Ship system to deliver light and powerful winding. This development removes any contact the inner part of the pinion gear has with the main shaft, as a high-sliding bushing supports it. Additionally, a special skid coating has been incorporated to further reduce sliding resistance. As a result handle rotation torque is reduced by 30% when compared to the conventional system, so winding, even under extreme load, is now even easier.
The introduction of Heat Sink Drag enhances the existing X-Tough Drag and Rigid Support Drag system, where a Heat Sink Panel dissipates heat build-up by approximately 50% to maintain consistent and smooth drag pressure during the fight. An exclusive Insulation Sheet also blocks heat transfer to the spool, preventing spool temperatures from increasing by around 30%.
To provide the ultimate in saltwater durability and waterproofing to an IPX8 standard, the X-Protect seal and labyrinth structure has been employed throughout the reel to repel water intrusion. This now features in the line roller, making this mechanism ten times more durable than the previous.
Features still built-in from the previous Stella SWB include Hagane Body, Hagane Gear, X-Rigid Rotor, AR-C spool, EI Surface Treatment, and 13+1 SA-RB bearings and 25kg of drag power. The HG models are designed for both casting and jigging, whereas PG is geared for jigging applications and XG for saltwater casting. So whether you are jigging for kings, casting poppers for giant trevally, the Stella SW is a proven saltwater performer for anglers that demand the most from their tackle