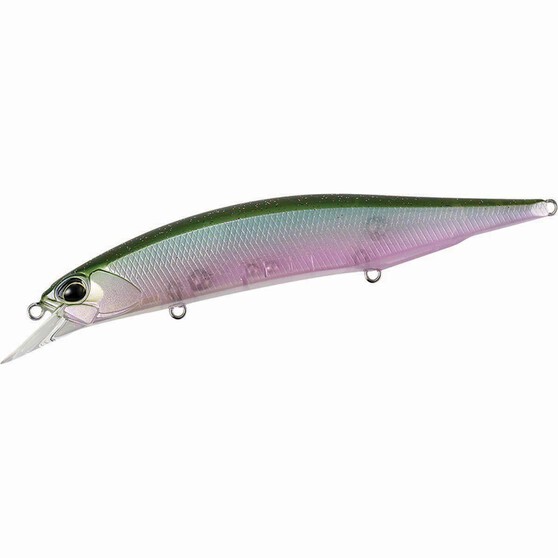 The Duo Realis 120F possesses a heavy flash that is significant in comparison to other rip baits its size, and this comes from the lures extremely high profile and ability to rotate its body 180- degrees (belly up). The 120 doubles as a rip-bait, being easily “ripped” without heavy rod tension.
Another powerful attribute is its ability to avoid any aimless drift. Linear drifting is displayed in a jerkbait without the ability to stop immediately, thus giving the angler less control when working the lure near or next to specific targets, the 120 is different! It can be stopped on a dime, flicked or twitched in a radius of inches. Realis Jerkbait 120 is so well balanced the lure can be burned during retrieve like a crankbait without failing during its travel.
The multiple actions and versatility are capable in the 120 due to high- end componentry hidden in its durable frame structure. The lip edges on the 120 are thin yet the most durable in the industry due to three reinforced locations.
The new floating model will allow the angler to fish with the 120 throughout the whole year, extending the target range.