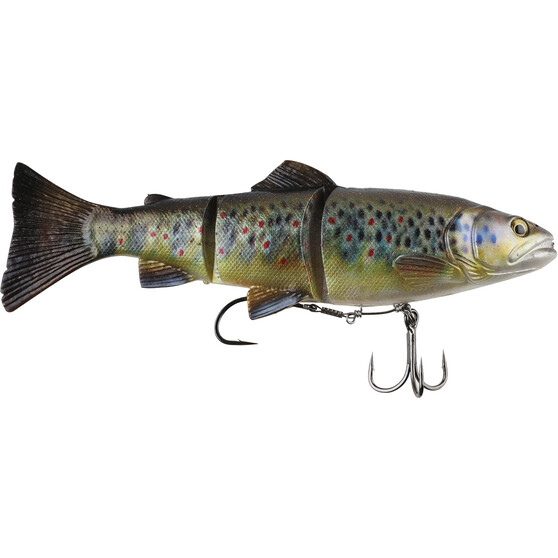 The Savage Gear ‘4D Trout Line Thru Swimbait’ is here! This range of swimbaits represents a new age of realistic lures with an unbelieveable Real Photoprint finish which could easily be mistaken for the real thing, not only looking the part, but feeling and swimming like the real deal as well. The ‘4D Trout’ is a super realistic trout imitation that’s been modelled from a 3D scan of a real trout. It’s simply too lifelike for fish to refuse! In freshwater, the ‘4D Trout’ is an absolute Murray cod and impoundment barra lolly, even the ultimate big bass or saratoga lure in the smaller size. In saltwater however, because of the similarities in profile to mullet, the ‘4D trout’ is the perfect lure to throw at large predatory species like mulloway, flathead and mangrove jacks, but realistically, the sky is the limit. Coming in 3 sizes, 15cm, 20cm & 25cm, and two models’, SS (slow sink for shallow water) and MS (moderate sink for a “stay down” retrieve), there is bound to be a size and style to match the hatch of the prey in your local area. All you have to do is cast it out and let the hyper- lifelike swimming action do the rest! It’s literally as close as you can get to using the real thing without fishing a livebait. There are a number of different hook configurations available for the ‘4D Trout’ allowing it to be rigged with either one or two trebles on the belly or back depending on how and where the angler wants to present the baits. Once a fish becomes hooked the trebles pull free from the swimbait and it slides up the line which prevents the fish using the weight of the lure to shake the hooks. Even though the ‘4D Trout’ will slide out of harm’s way during the fight, it’s joints are reinforced with mesh to make sure they withstand the brutal strikes they will no doubt be exposed to. The ‘4D Trout’ comes pre-rigged with ultra-sharp Savage Gear trebles, so it’s ready to fish straight out of the packet. If you want to see what monsters are lurking around your local area, be sure to grab yourself a couple of the of the new Savage Gear ‘4D Trout Line Thru Swimbait’s’ and hang on!